“‘Amen, I say to you, whoever does not accept the kingdom of God like a child will not enter it.’

Then he embraced them and blessed them, placing his hands on them.”

“Warning of the Flood”

“When the LORD saw how great the wickedness of human beings was on earth, and how every desire that their heart conceived was always nothing but evil, the Lord regretted making human beings on the earth, and his heart was grieved. So the LORD said: ‘I will wipe out from the earth the human beings I have created, and not only the human beings, but also the animals and the crawling things and the birds of the air, for I regret that I made them. But Noah found favor with the LORD.'”

“God told Noah. ‘For mankind must be punished for its wickedness.'”

“God told Noah that He was going to send a huge flood to cover the earth, but that Noah and his family would be spared. ‘You must build an ark, and into this ark you must lead pairs of every creature. When the flood comes, these will be the only creatures to survive.”

“Bravely Noah and his family set to work to build the ark as God had commanded. Every day they cut and sawed and hammered. Finally the ark was finished and Noah waited for God to tell him what to do.”

“Noah obeyed God. Clip-clop, thump, thump, boing, boing–all the animals went into the ark. And so did Noah and his family. When everything was done as God commanded, God shut the door of the boat.”

“Outside, the rain poured down. The waters rose high, and the ark rocked back and forth. Only Noah, his family, and the animals on the ark were left.”

“Finally God stopped the rain and sent a breeze to dry the earth.”

“Noah sent a raven to find dry land. The raven didn’t find dry land, so it came back tot the ark. Then Noah sent out a dove. The dove came back, too. Noah waited seven days, then he sent out another dove. That dove returned with an olive leaf in its beak!”

“Noah and his family left the ark. Noah built an altar. He thanked God and praised him. ‘Thank you, God, for saving us.'”

“God was pleased with Noah and all that he had done. ‘Never again will I destroy people and animals with a flood.’ he said.”

“As a sign of my promise, I will give you a rainbow Go and enjoy the new world.'”

“Then the rains fell for forty days and destroyed all living things except Noah and the others in the ark.

When the storm was over, Noah set a dove free.

When it did not return, Noah knew it had found a place to perch and that the waters had gone down.

Then he and the others stepped forth on dry land”

God’s Promise To Humankind After The Flood

“All the days of the earth,

and day and night

A Building Block of Religious and Cultural Literacy

Here are six reviews on books that tell the wonderful story of Noah. Five of the books tell the traditional Bible story, and one is a fairy tale for children that has little to do with the Bible version, but is lovely as Children’s Literature and enrichment.

The story of “Noah’s Ark” from the Book of Genesis in the Bible has been told over thousands of years. It comes from oral tradition of a story told throughout the generations by the ancient people in the region of Mesopotamia. Years ago, I heard in a recorded lecture by Biblical scholars that many cultures from all over the world had their own “Flood Story.” The lecturer also said that enormous floods possibly occurred early in human development when an ice age began to warm up. One thing is certain, the story of “Noah’s Arc” is a favorite Old Testament story from the Book of Genesis that shows the power and might of God and tells of the the awesome obedience of a humble man, whom God found to be honorable at a time of corruption and misbehavior in other humans. God comes to Noah and gives him astonishingly difficulty and precise instructions, and Noah obeys.

Here are six different versions that tell the ancient story of Noah and his family. The first three are exquisitely illustrated and the texts deliver the traditional story according to the Bible. The last three are written for younger children. On Noah’s Ark is the only book in the group that tells the story from a non-religious point of view. The story of Noah and the Ark is important for children to know not only for the religious significance, but also for cultural literacy. It is a story that has endured for thousands of years and is immediately recognized by the sentence, “It rained for forty days and forty nights.” There are many versions. Here are six that I enjoyed reading. Connie Goldin

Noah’s Ark by Peter Spier is absolutely beautiful. Spiers translates a Dutch poem, “The Flood” by Jacobus Revius (1586-1658) which is printed in its entirety on one page. All of the other pages are illustrations that tell the story without words. Spiers won the Caldecott Medal for Illustrations in a Children’s Book in his version of Noah’s Ark in 1978.

Noah’s Ark by Jerry Pinkney creates a magnificent picture of the Biblical story of Noah. The illustrations are powerful and complex. There is great detail in the paintings which provide information about the time and place. The text follows the story from the Book of Genesis: “And God set a rainbow in the heavens as a sign of this promise to Noah…”

The Story of Noah and The Ark (According to the Book of Genesis From The King James Bible) Paintings by Gennady Spirin is amazingly beautiful with classical-style paintings. Spirin tells the story of Noah from the Book of Genesis through his powerful illustrations. “I do set my bow in the cloud, and it shall be a token of a covenant between me and the earth.”

Noah’s Arc (Baby’s First Bible) by Roger Priddy is a beautiful small board book that tells the story in simple to understand language. It is lovely for babies and young children.

Noah’s Ark ~ El Arca de Noé Written by Carol Wedeven, Illustrated by Miriam Sagasti is a bilingual English/Spanish version of the story in rhyme. It tells the story from the traditional religious viewpoint and has lovely illustrations for children.

On Noah’s Ark Written and Illustrated by Jan Brett tells the tale from a non-religious viewpoint without the central figure of God. It is children’s literature, not a Bible story. Brett’s books are beautiful, and this version of “Noah’s Ark” is told through Noah’s granddaughter as she moves amongst the animals. Brett’s intricate illustrations are always charming and intriguing. It is a delightful fantasy, with wonderful animals galore. Read it for enrichment and pleasure.

A Prayer from St. Francis of Assisi

an instrument of Your peace.

Where there is hate, let me show love;

Where there is hurt, forgiveness;

Where there is doubt, faith;

Where there is unhappiness, hope;

O Divine Master, grant that I may not so much seek

To be consoled, as to console.

To be understood, as to understand.

To be loved, as to love.

For it is in giving that we receive.

It is in pardoning that we are pardoned.

It is in dying that we are born to 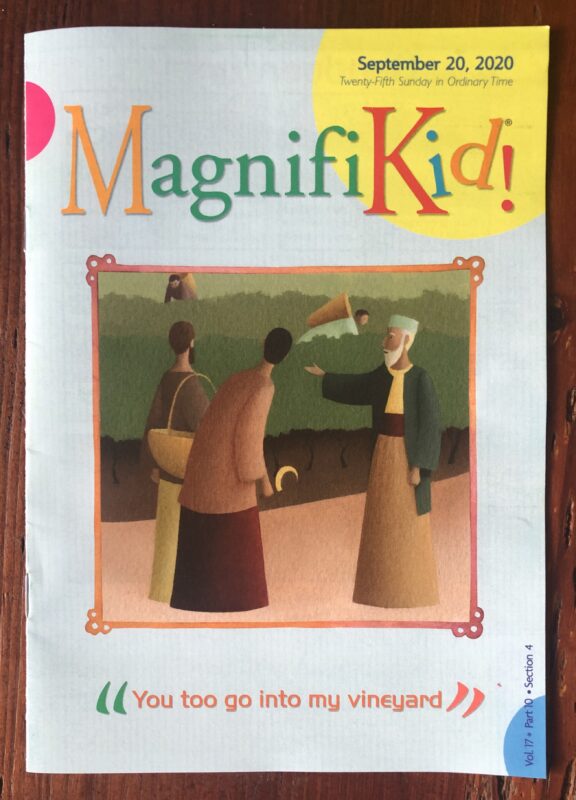 Please read the story of “Noah’s Ark” in a Catholic Children’s Bible or your own family Bible. It is long, covering several chapters, in “Genesis” on the USCCB.com website.

Invite your children to draw or paint a picture about Noah and the flood using whatever tools you have on hand.

Talk about the important aspects of “Noah’s Ark”: God’s talking to Noah, the ark, animals two by two, forty days and forty nights of rain, the raven, the dove, the dove with an olive leaf in its beak, God’s promise, God’s forgiveness, and the rainbow.