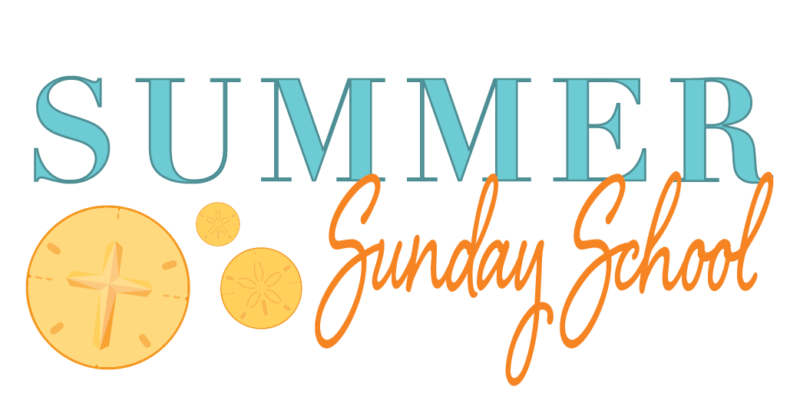 Hello Parents. The story of the “Loaves and Fishes” tells about the miracle, performed by Jesus, of feeding thousands of people .  It is interesting to note that there are two versions in the Bible–Matthew, chapter 15:32-29 and in Mark, chapter 6:34-44. Matthew uses the number of 4000 people and Mark uses 5000 people.  The mosaic above, depicting the Loaves and Fishes miracle, was found in a very early Christian church in Israel.

“Jesus takes a very small gift, five loaves and two fish, and uses it to feed a crowd of thousands! He starts with something that seems much too little, and makes it become more than enough, something so great that there are baskets left over!”

This is a collage, using cut-out fish and a cross from a watercolor painting, and making a print circle using a rubber jar opener as a “stamp.” Circle is imprinted onto black paper and the fish and cross are made using liquid watercolors on watercolor paper. 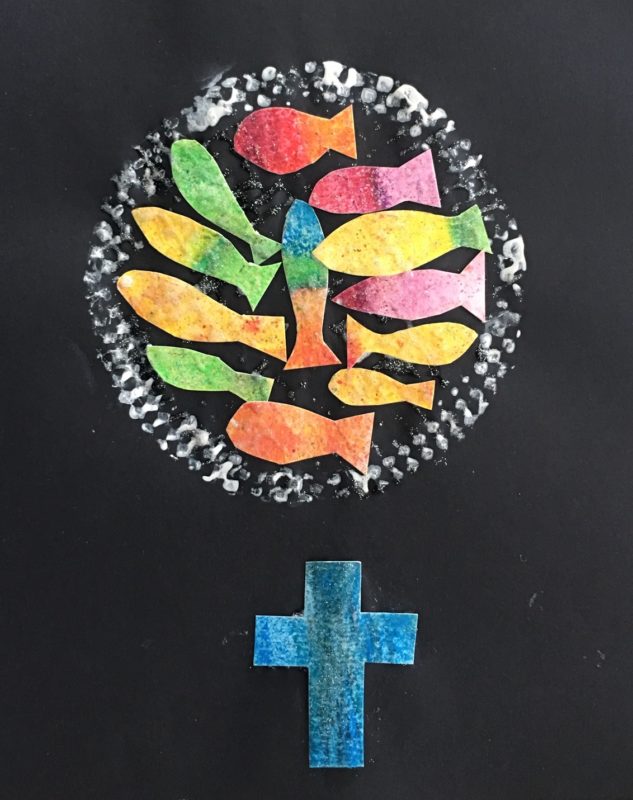 “The Feeding of the Four Thousand”

“Jesus summoned his disciples and said, ‘My heart is moved with pity for the crowd, for they have been with me now for three days and have nothing to eat. I do not want to send them away hungry, for fear they may collapse on the way.’

The disciples said to him, ‘Where could we ever get enough bread in this deserted place to satisfy such a crowd?’

Jesus said to them, ‘How many loaves do you have?’ ‘Seven,’ they replied, ‘and a few fish.’

He ordered the crowd to sit down on the ground.

They all ate and were satisfied. They picked up the fragments left over—seven baskets full.

Those who ate were four thousand men, not counting women and children.

And when he had dismissed the crowds, he got into the boat and came to the district of Magadan.”

Another Version of the Story:

Source: USCCB.org “The Feeding of the Five Thousand” Mark, chapter 6:34-44

“When he disembarked and saw the vast crowd, his heart was moved with pity for them, for they were like sheep without a shepherd; and he began to teach them many things.

By now it was already late and his disciples approached him and said, ‘This is a deserted place and it is already very late.

Dismiss them so that they can go to the surrounding farms and villages and buy themselves something to eat.’

He said to them in reply, ‘Give them some food yourselves.’ But they said to him, ‘Are we to buy two hundred days’ wages worth of food and give it to them to eat?’

He asked them, ‘How many loaves do you have? Go and see.’ And when they had found out they said, ‘Five loaves and two fish.’

So he gave orders to have them sit down in groups on the green grass.

The people took their places in rows by hundreds and by fifties.

Then, taking the five loaves and the two fish and looking up to heaven, he said the blessing, broke the loaves, and gave them to [his] disciples to set before the people; he also divided the two fish among them all.

They all ate and were satisfied.

And they picked up twelve wicker baskets full of fragments and what was left of the fish.

Those who ate [of the loaves] were five thousand men.”

According to Catholic Book of Bible Stories for Children, the story goes as follows:

“Jesus taught people in many ways–through telling stories called parables; through healing the sick and raising the dead, by walking on the sea during a storm, and by providing food and wine at times when there was none available. The story of “Fishes and Loaves” or “Jesus Feeds Five Thousand” is a story of a miracle.”

A Paraphrased Excerpt from Pages 132-134

“Jesus again was out speaking to thousands of people and healing the sick who had come to him for help. The disciples told Jesus to send the people home so they could eat. Instead, Jesus said to the disciples, ‘You feed the people.’ A child brought a basket filled with two fish and five loaves of bread. Jesus said, ‘Bring the food to me.’”

Here is what he did:

“Jesus took the five loaves and two fish and looked up into the heavens. He blessed the bread and broke it into pieces. He gave the pieces to his disciples. The disciples gave food to the crowd. It was a miracle!” Everyone ate and the food multiplied to be able to feed more than 5000 people. The people wanted to follow Jesus and learn from him wherever he went.”

(Does this remind you of something you have heard before? Clue: The Last Supper)

For more easy- to- understand stories about the many ways Jesus helped and taught people, read The Miracles of Jesus by Katherine Sully, Illustrated By Simona San Filippo. Even though it is written for younger children, independent readers will enjoy the visual learning provided by the illustrations.

Our Art Project–“Thousands of Fish!” 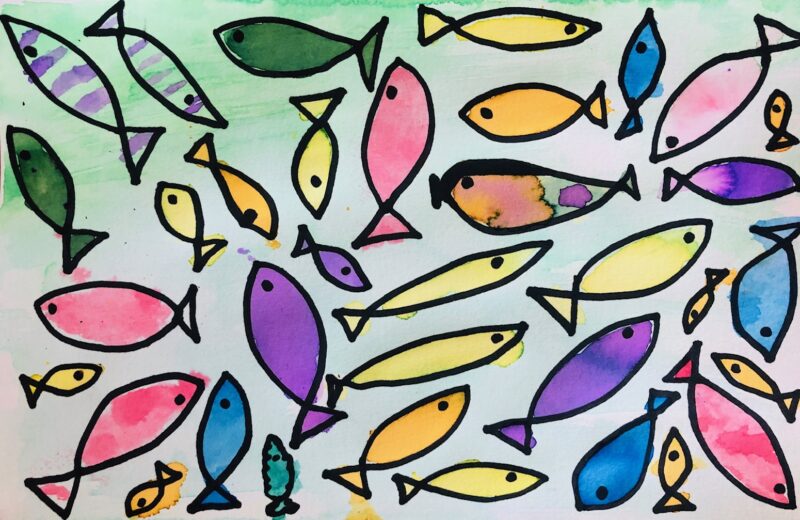 This is a simple art project that can be done in different ways–markers, crayons, colored pencils, etc. I started with a permanent ink marker in black (A Sharpie is a great choice.) and began to fill the paper with fish, jammed together. Next, I used diluted watercolor paint for a background. The final step was to color in the fish with a medium paint brush. If you have Mod Podge glue handy, brush it on the dry painting and let it dry for a glossy finish. Feel free to embellish with glitter glue or glitter paint for shiny fish scales!