“To Everything There Is a Season”

A Tangerine dipped in paint made the circles, and plastic mesh made the “grids.”

Today is November 1st, and we celebrate ‘The Solemnity of All Saints.” MagnifiKid! (Vol. 17. Part 12. section 2) provides two excellent explanations about saints and intersession in “This Week’s Spotlight”:

“The Communion of Saints” Page 12

“When we recite the Apostles’ Creed, we confirm at the end that we believe ‘in the communion of saints.’ We believe that we are united with all baptized people–those on earth, those who suffer in purgatory, and those who are in heaven. We are linked to them through baptism and the Eucharist, and we all form the one Body of Christ. We can pray for each other, even though we may not know each other personally. In the Church, every good act blesses everyone.”

“To intercede means to ask for something on behalf of another. After the homily at Mass, in the Universal Prayer, or Prayer of the Faithful, we offer prayers for the needs of the Church and the world. These prayers are called “intersessions.” The saints intercede for the Church from heaven. Their prayers for us are very powerful. They want to help us and pray that we become saints too! Saint Thérèse was talking about intersession when she said: ‘My heaven will be spent doing good upon the earth.'” 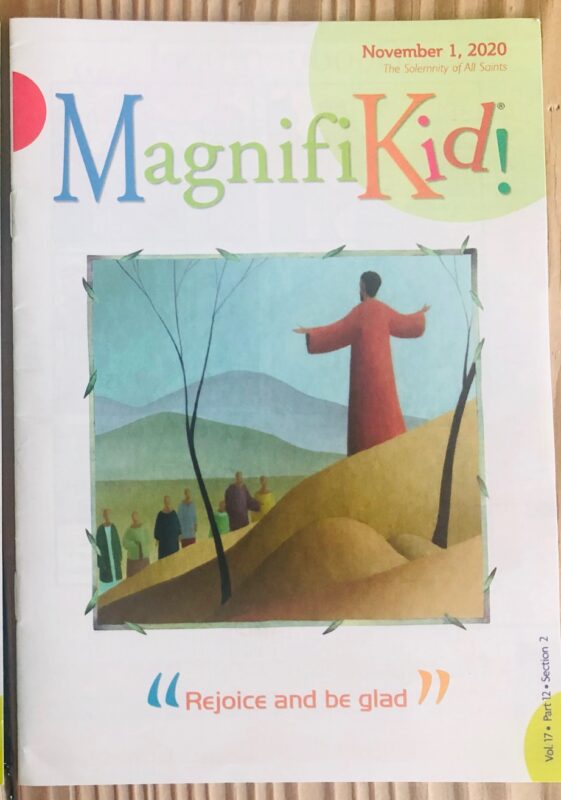 The Apostles’ Creed–Please Read Out Loud With Your Child

‘The Apostles’ Creed is so called because it is rightly considered to be a faithful summary of the apostles’ faith. It is the ancient baptismal symbol of the Church of Rome. Its great authority arises from this fact: it is ‘the Creed of the Roman Church, the See of Peter, the first of the apostles, to which he brought the common faith”‘ 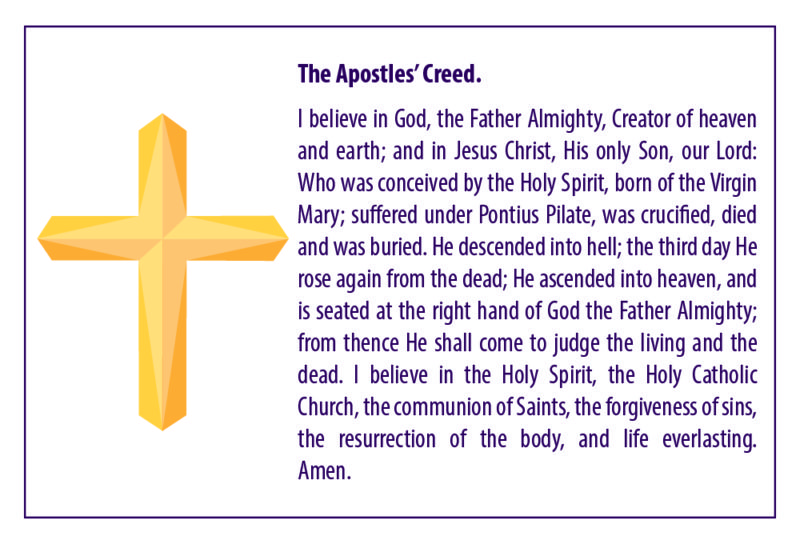 “Jesus went up to the mountain to pray,
and he spent the night in prayer to God.
When day came, he called his disciples to himself,
and from them he chose Twelve, whom he also named Apostles:
Simon, whom he named Peter, and his brother Andrew,
James, John, Philip, Bartholomew, Matthew,
Thomas, James the son of Alphaeus,
Simon who was called a Zealot,
and Judas the son of James,
and Judas Iscariot, who became a traitor.”

Who Are The Apostles?

“Jesus gathered all of his disciples around him. He named twelve apostles to preach the gospel and gave them the power to cast out demons and heal the sick. These twelve were: Peter, his brother Andrew, James, his brother John, Philip, Matthew, Bartholomew, Thomas, James, Thaddeus, Simon, and Judas Iscariot.”

A Blessing Before Meals

“Bless us Oh Lord, and these thy gifts, which we are about to receive, from thy bounty, through Christ, Our Lord. Amen.”

Our Art Project–“The Bounty of Our Lord”

Both of these paintings use watercolor paints and watercolor paper. My sample used sponges, brushes, and little circle sponges on sticks to apply the paint. I used a paper plate, painted with tempera paint, as a stamp, to outline the pumpkin. The child’s beautiful painting was done by watercolors on watercolor paper, applied with a medium paint brush.

Family Discussion: How many of you have the names of saints? You can Google it, if you don’t know about your name. I did and found out my first name, Constance, was the name of a 1st century Roman saint. I then realized that my middle name, Paul, chosen because it was my great grandmother’s maiden name, was an Apostle and revered Christian saint! I had dropped my middle name after I got married and stopped using the name “Paul.”